by Sally Slingsby on 22nd December 2017 in News and Events

2017 has flown by! It’s been a wonderful year for both dot-art and dot-art Schools, so we’d like to take the opportunity to share with you some of our many highlights of the year. To our artists, class teachers, partners, dot-art School Champions, art owners and those who have paid us a visit in our home on Queen Avenue, we can’t thank you enough and we hope you have a very merry Christmas.

The year began with the first of our annual Christmas exhibition The Liverpool Collection, which featured over 20 artists and celebrated Liverpool’s unique culture.

This year we have signed up four new corporate art rental clients, as well as continuing to work with our loyal regular customers. 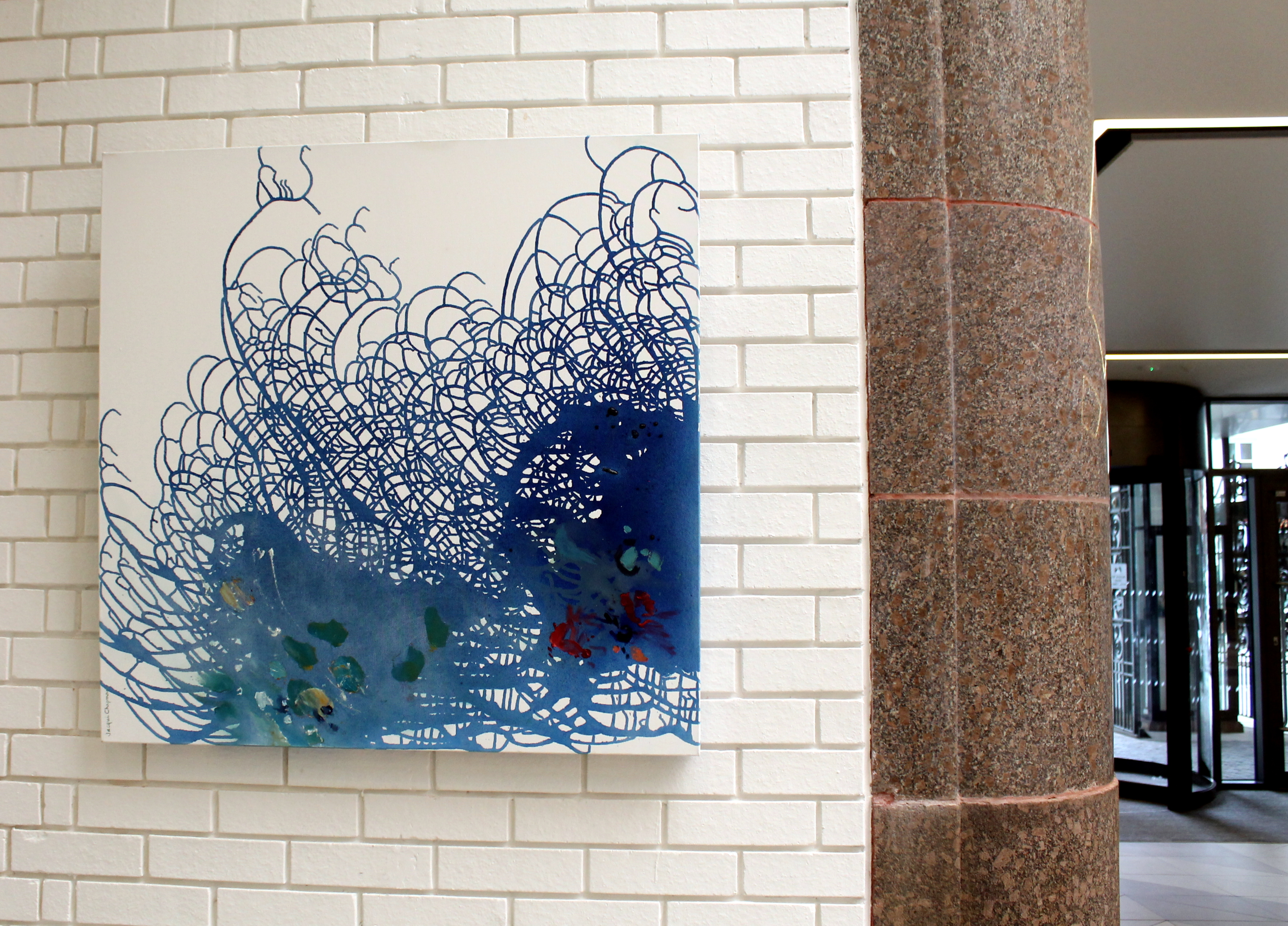 This month we celebrated the first anniversary of our beautiful new (19th century new) home here on Queen Avenue, Castle Street with an exhibition aptly celebrating movement of the human body and which featured work by vibrant painter David Brightmore and innovative sculptor Faith Bebbington. 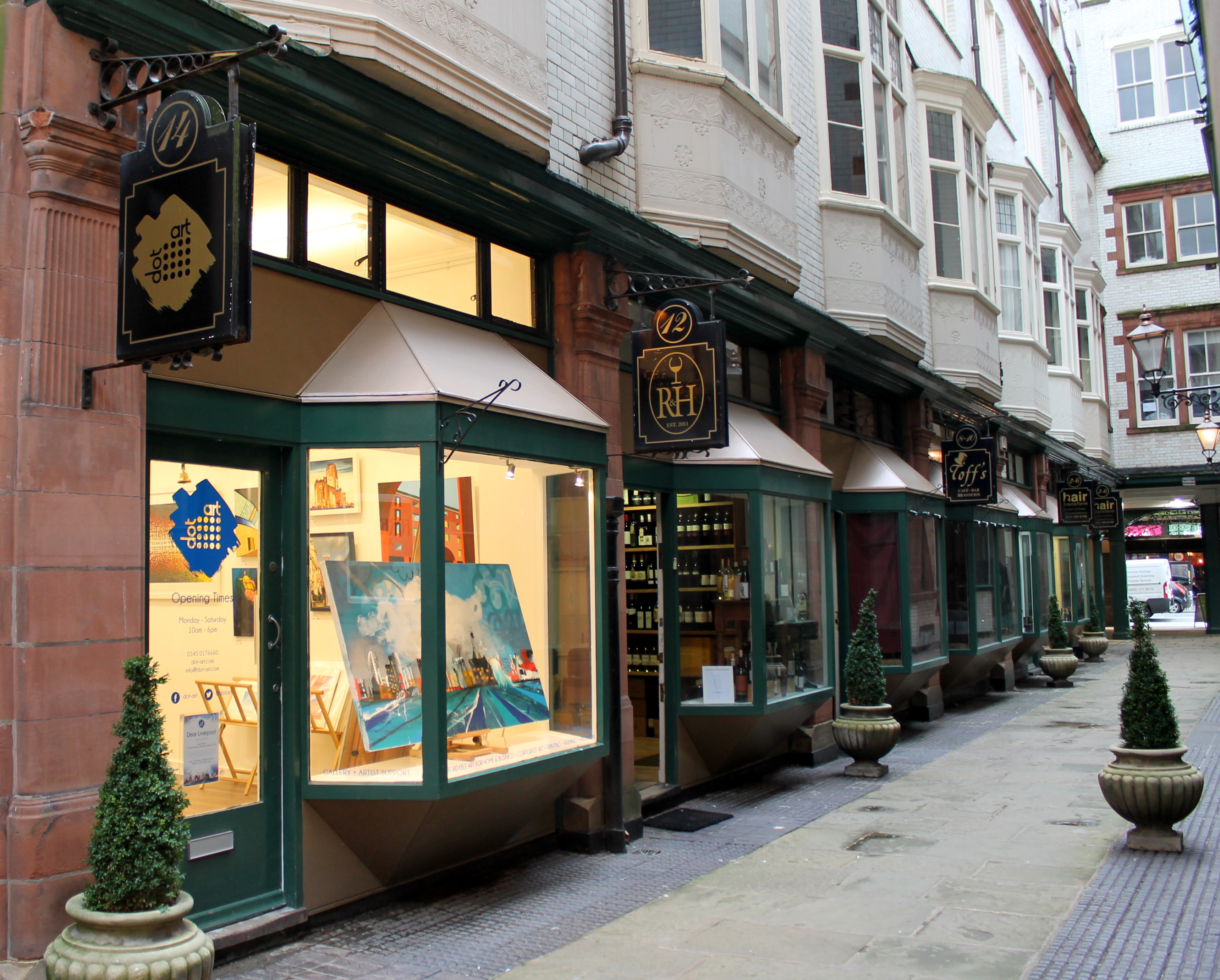 dot-art Schools took on an incredible number of applications at the beginning of this year for the inter-school art competition in Liverpool which collectively has involved over 4000 students and 230 schools since its inception in 2012.

Over the past academic year we have been delighted to launch a second inter-school art competition in the Cheshire region, with the overall winners announced at a prize-giving ceremony in Mid Cheshire College Gallery.

A wonderful new LJMU Scholarship prize was also announced by Professor Caroline Wilkinson, which will provide £1000 per year for 3 years toward course fees for the Year 9 winner and two runners up if they take up a course within the Arts Faculty. A big thank you to this years sponsors and supporters; LJMU, Tangle Teezer and St George’s Hall.

As well as inviting schools to sign up to the competition we are currently seeking companies who believe in the importance of creative education to become dot-art Schools Champions. Many schools would love to take part in the dot-art Schools programme but budget cuts have made it a challenge, so for a small contribution you could enable a school to take part in our programme. 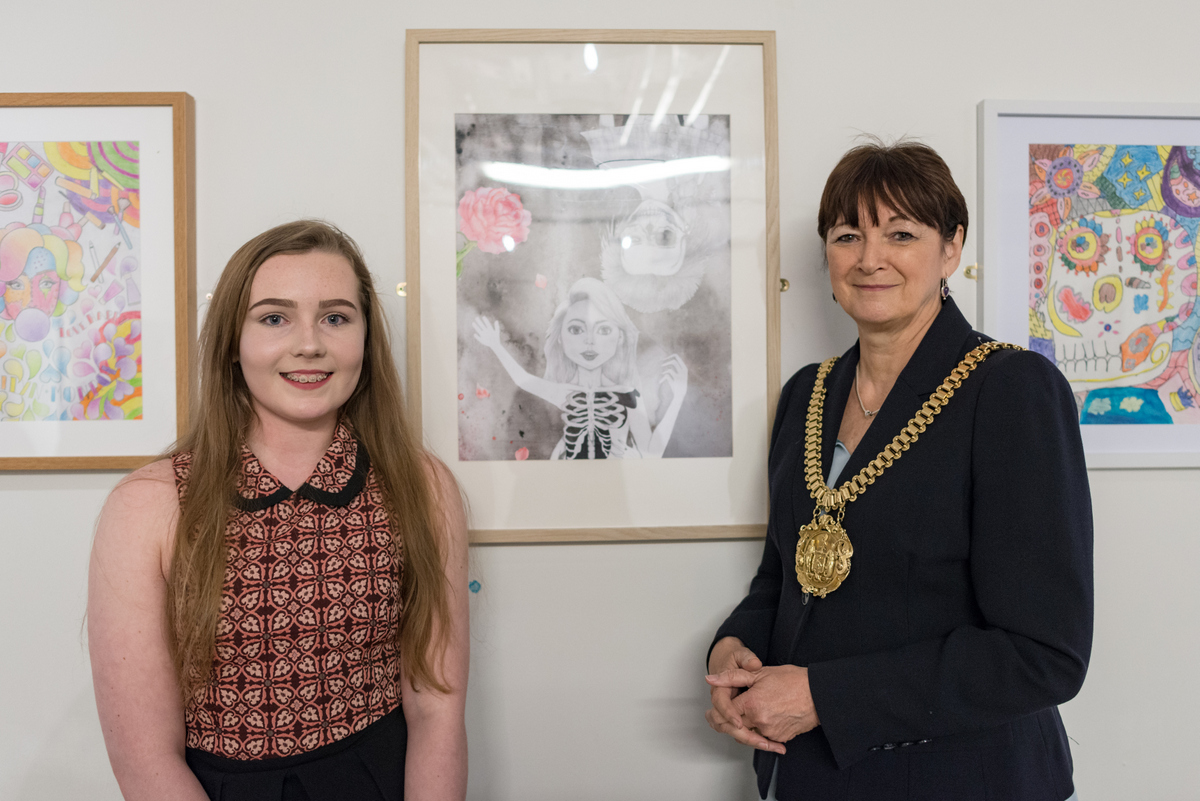 The arrival of spring brought us to a change in exhibitions. Seasons, featuring paintings by five artists; Martin Jones, Michael Love, Lee Summerfield, Hazel Thomson and Joe Thompson celebrated the thawing winter and the months of growth ahead, focusing on the changes in the landscape around us during this time.

The tail end of specially themed exhibition Seasons tied in to Liverpool’s renowned annual culture crawl Lightnight, which every year strings together arts and music organisations across Liverpool, showcasing the city’s creative talent.

This year the city revelled in the theme of time, and we celebrated with our neighbours and friends Bruntwood, Cau and the Interesting Eating Company for a free, fun-filled evening of art, music and food in our acoustically brilliant (who knew?) Queen Avenue. The street was temporarily adorned with other-worldly recycled artwork by Sarah Nicholson. 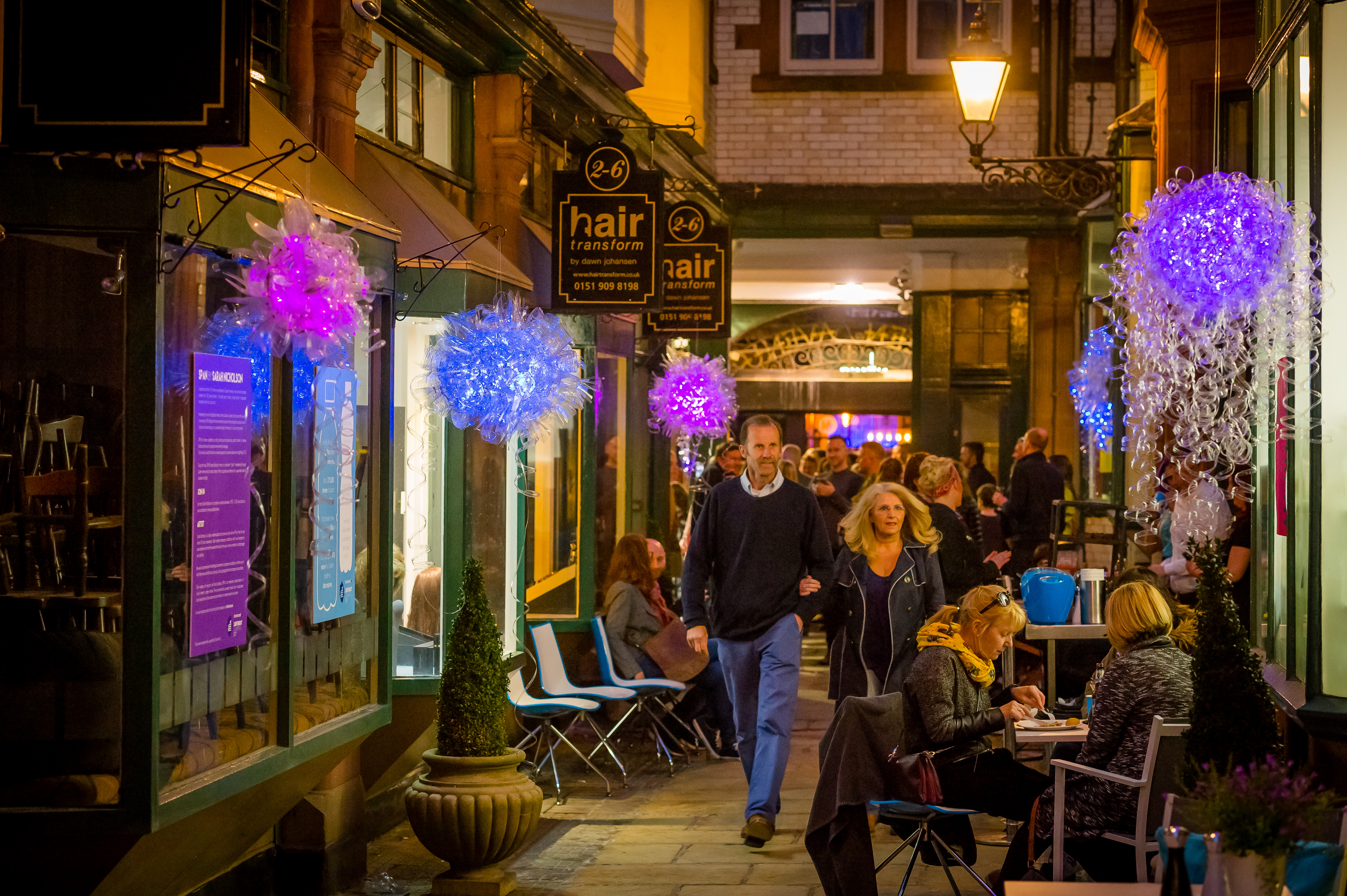 Launched at the end of May, the summer exhibition at dot-art showcased the work of two artists who focused on depictions of microscopic details and global overviews, respectively. Amy Ritchie and Sarah Nicholson both took elements of nature and changed their scale so dramatically that completely abstract, but stunningly beautiful images, were created.

On Friday 23rd June we held a Creative Careers Event for teachers and education professionals to highlight the important of a creative education to a wide range of careers and provide them with tools and information with which to advocate for creative subjects in schools. It began with a tour of the LJMU School of Art and Design, followed by a visit to the dot-art Schools exhibition at St Georges Hall, finishing with a program of guest speakers at the County Sessions House at the Walker Art gallery. This was the first event of its kind we have held, but we intend to build on its success going forward, as part of our dot-art Schools programme.

This year we also took part in the Sergeant Pepper at 50 celebrations and artist David Andrews created a large scale mural on the old BHS building. 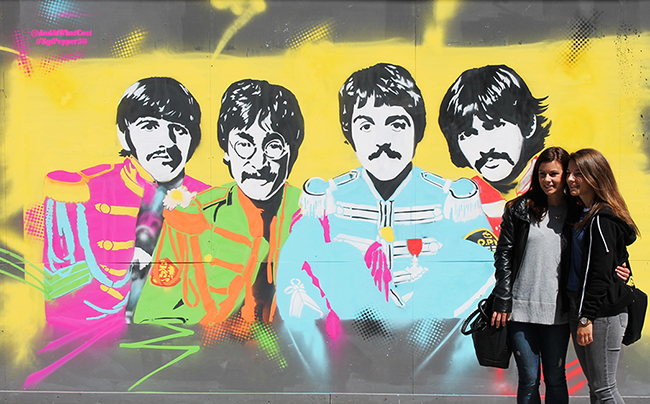 In April we opened up submissions for the Liverpool Art Fair to all artists based within a 35 mile radius of Liverpool and were overwhelmed by the response – almost 300 artists and 1300 works were submitted. Our selection panel met in June and had the difficult task of choosing the 105 artists whose work would be displayed (including 23 dot-art Members).

Liverpool Art Fair returned for its sixth year in July, this time taking place at the Pier Head Village in a purpose-built art gallery for the entire summer, and was visited by over 25’000 people.

We also launched the first Billy Wilson People’s Choice Award. Billy Wilson was the owner of The Gallery Liverpool on Stanhope Street, who sadly passed away last June. He was a huge supporter of the arts in Liverpool and we hope to honour his memory with this annual prize. The response was fantastic, with almost 1000 votes cast. The winner was announced at an event on 23rd August, attended by many of Billy’s family. We were delighted that member Hazel Thomson was the deserving winner of £250 of Cass Art vouchers. 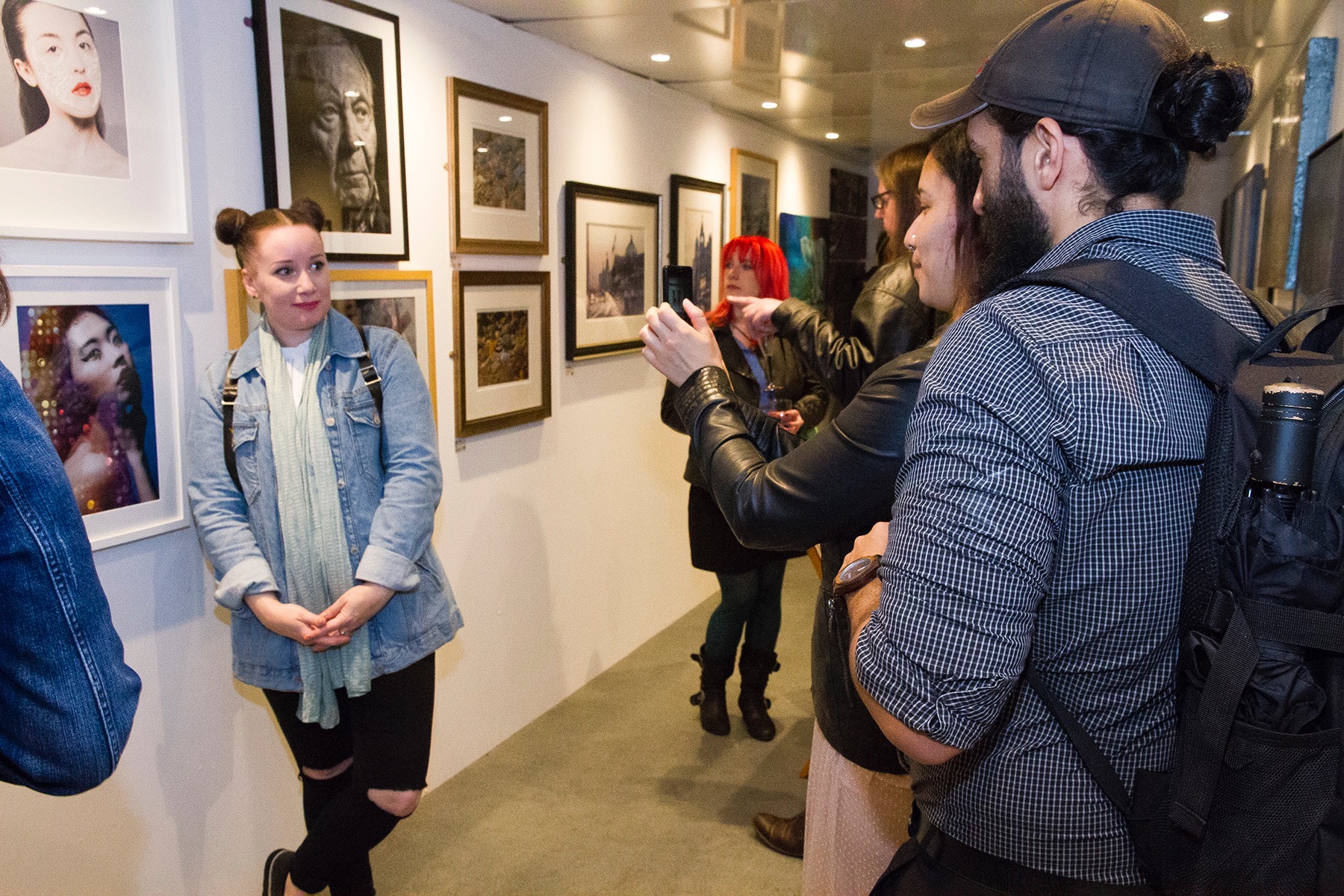 Throughout the past year our artists have delivered over 40 days of workshops in schools around the Liverpool region, including a project with artist David Andrews and Liverpool Football Club, who have been working with Year 5 and Year 6 pupils to create a large comic-style mural to celebrate the 125th anniversary of the club. In the new year the art work will be printed and displayed at Anfield Stadium.

We bid a fond farewell to our wonderful and multi-talented Gallery Manager Jess Fairclough who, after two years at dot-art, has moved on to a fantastic new role at Liverpool-based film and tech spearhead FACT. We wish her the very best of luck in her new and exciting endeavours! 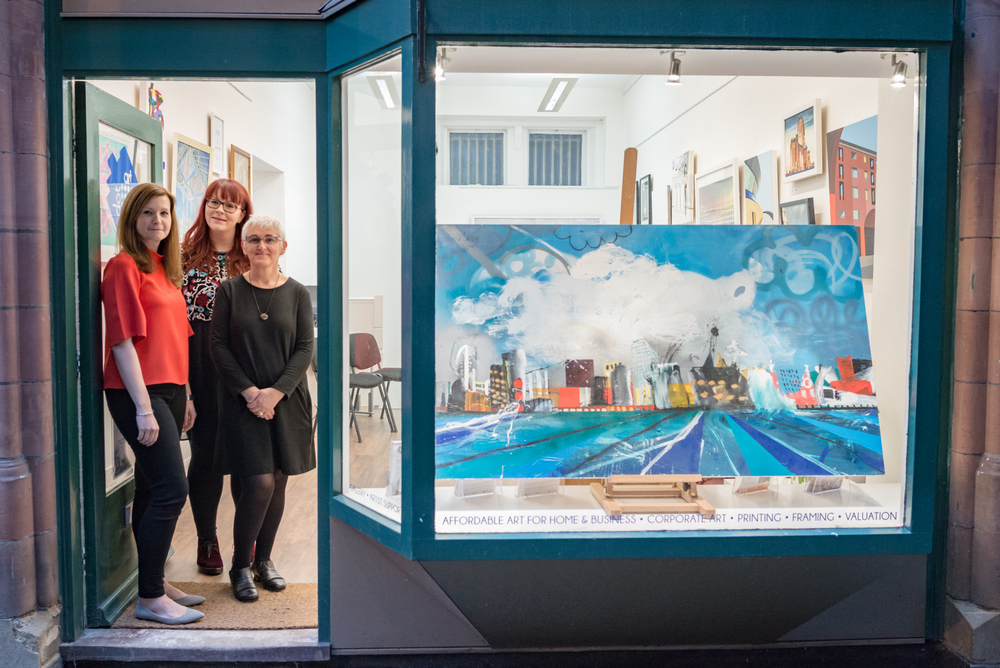 In October we introduced the first of a brand new art class for children! dot-art Club is a 6 week block of Saturday drawing workshops for 7 to 11 year olds run by professional teacher Hilary Dron, which gives creative kids the opportunity to develop their drawing skills and build a lifelong love for art. After a very positive response (from some very creative young artists), the next two blocks have been confirmed for the new year. You can book a place for your young artist here.

This year we have completed a number of exciting projects for corporate clients including David Andrews’ 13 large scale paintings in Atria in Bolton. David worked with North West based property firm Bruntwood to create vibrant and colourful artworks, transforming one of their new office spaces. You can read more in our Case Study blog post here. 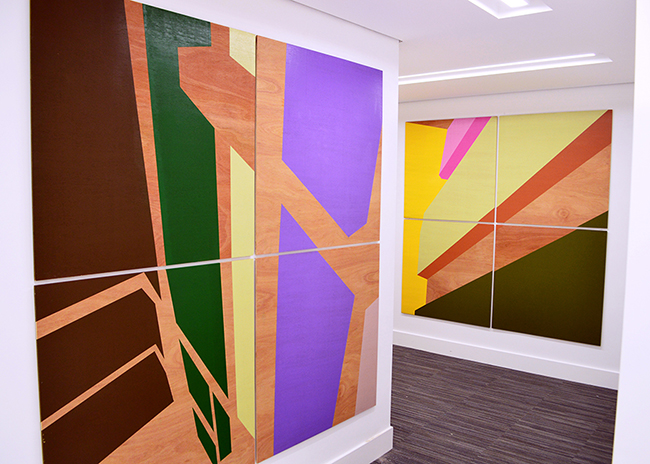 November saw the launch of our winter show The Liverpool Collection, the second in our annual series of Liverpool themed art. With art from over 21 local artists, this has been an incredibly popular exhibition as it celebrates Merseyside’s iconic landmarks and unique culture.

This month we also confirmed some brand new and unusual classes to be part of our 2018 programme of creative courses, including Graffiti and Sketching in the Williamson Tunnels and Wood Carving! If you want to start planning an artistic and fun 2018, you can check out the rest of our creative courses here. 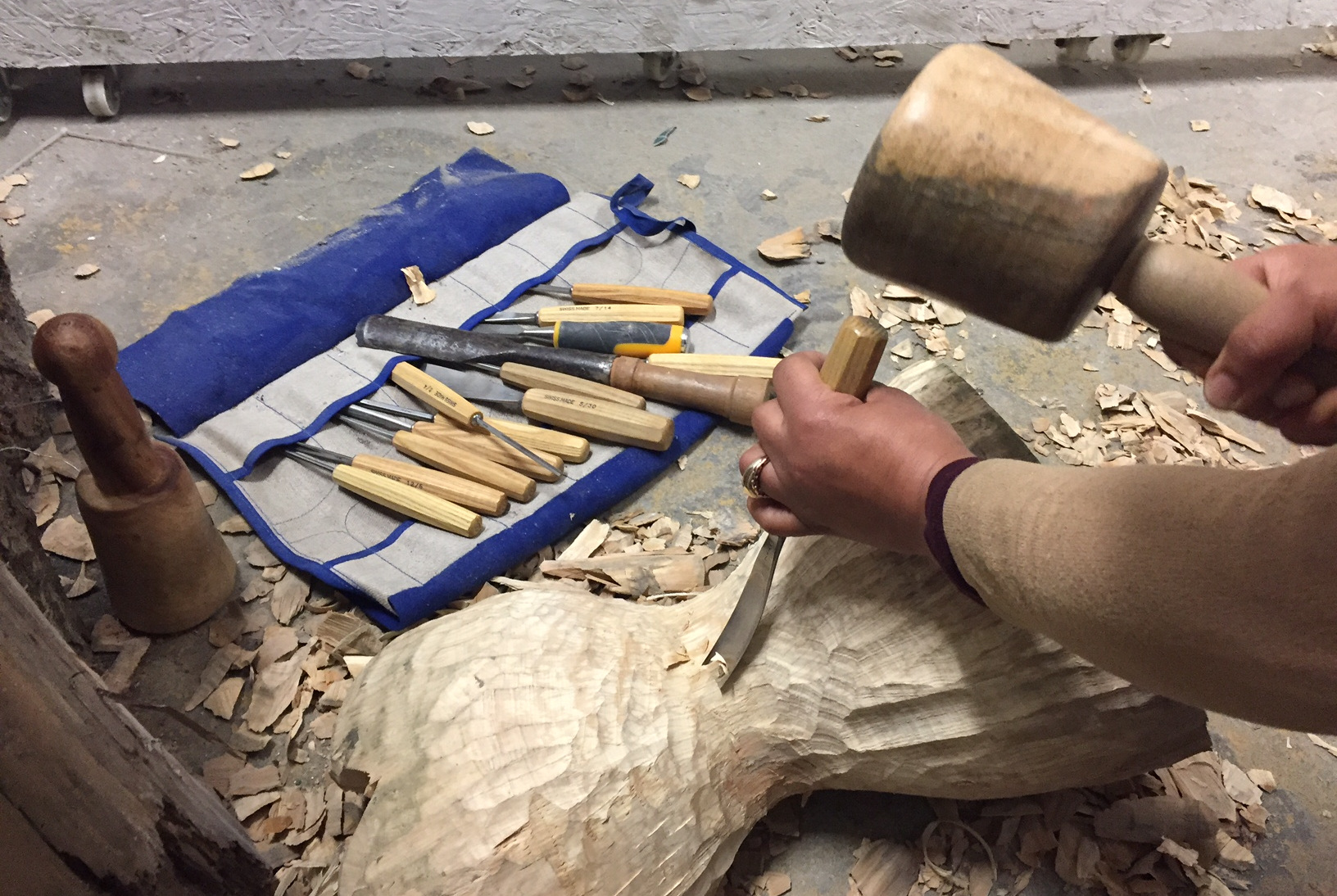 This year we are incredibly pleased to announce the launch of the Liverpool Plinth competition. Together with Liverpool BID Company and Liverpool Parish Church, dot-art will be showcasing a new piece of sculpture in the public realm every year.

Open to sculptors working or living in the North of England, applications for the competition are being taken up until the 7th January 2018 and the selected artist will have their work exhibited in a key location on Liverpool’s iconic waterfront. To read more about how to apply, head here. 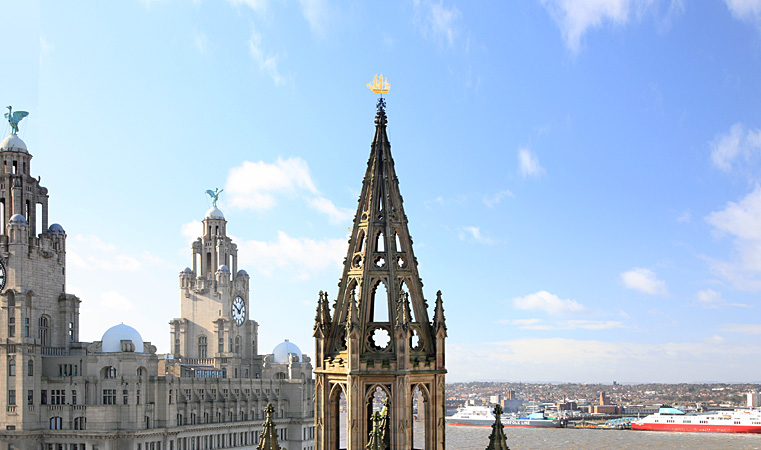 We will be closed from the 24th December to the 2nd January, we hope you have a wonderful Christmas and wish you all the best for a fantastic new year!