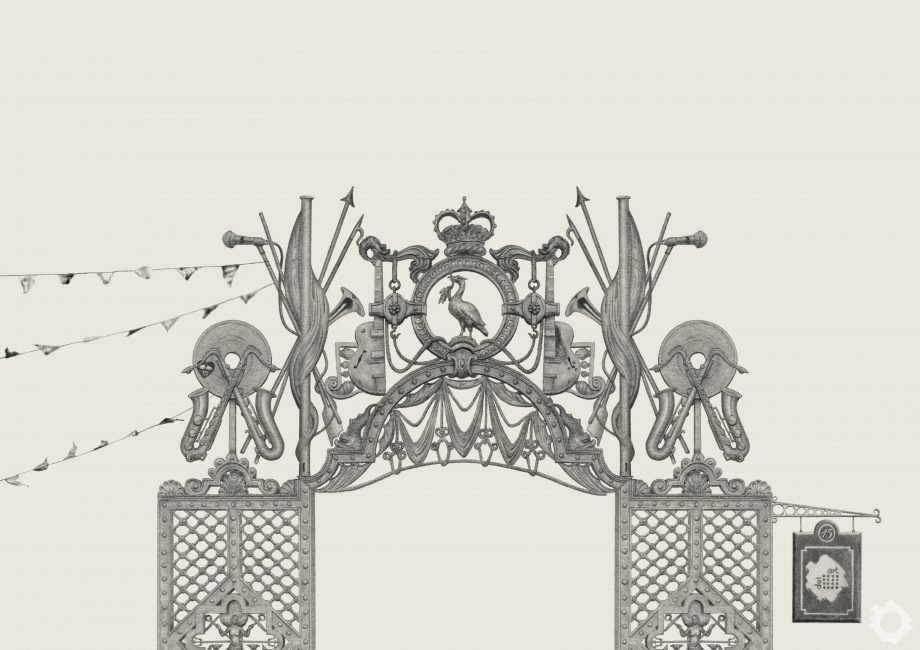 “For my print, I have decided to focus on the strongly intertwined themes of Liverpool’s cultural past; music and maritime. The Sailors’ Home was an institution in Victorian-era Liverpool that provided visiting sailors with a safe place to stay, learn and socialise. The doorway for the grand building was concealed by the beautifully intricate wrought iron gates, which would have seen thousands of sailors pass through them in the Home’s 150-year history.

Since 2011 the gates have been proudly displayed on Paradise Street as a monument to the sea men themselves. It is the people in Liverpool who provide the greatest inspiration after all. There is no doubt that this period of Liverpool’s history provided a strong foundation for things to come, most notably the music. To illustrate this I have replaced some of the nautical symbols present in the original gates with a great collection of musical objects.

The ships wheels have been replaced with records, as a nod to the wealth of music shops we possess and various musical instruments sit in harmony with the fish, ropes and shells to reflect the thriving music scene and Liverpool’s legendary past. I created a version of this drawing for the Liverpool Soul Weekender that was meant to happen in June but has been postponed until further notice due to Covid.

As a nod to them and to show a bit of support, you will find a reference to them in here too. In addition to the music and maritime theme, I have picked out a few other key contributions to Liverpool’s culture. To add some movement to the image and to reference one of the city’s most diverse and interesting communities, I have included windswept bunting, which would be found at Granby Street market on the first Saturday of every month.

Finally, to reference Liverpool’s eclectic art scene, I have added dot-art’s hanging sign from the beautiful Queen Avenue. You might notice that I have changed the building number from 14 to 15… Happy birthday!”