Mike Goodwin on his art practice

“My earliest artistic influences were probably the great comic artists of those juvenile publications ‘The Dandy’ and ‘The Beano’, notably Dudley D Watkins and Leo Baxendale. I was also a great admirer of Thomas Henry (a.k.a Thomas Henry Fisher) who illustrated the ‘Just William’ books. This instilled a love for pen and ink drawing, although I do love colour. Since those early days, I have been influenced by just about every genre of art with the exception of conceptual art.

Early on in my artistic career, I did pocket cartoons. I still do, but these days they are larger and more illustrative, with a lot more detail, although still the same jokes! I take inspiration from everywhere and quite often include a musical reference, usually in the title, where appropriate.

My style is a mixture of realism and stylised caricature and many of the illustrations depict humorous situations using the Liverpool waterfront as a back-drop. I aim to make the drawings work on more than one level.

I want them to look good from a distance and also to reveal more interest on closer scrutiny. I employ hyperbole to show absurd situations and reinforce the quirky, off-beat images with carefully considered text.” 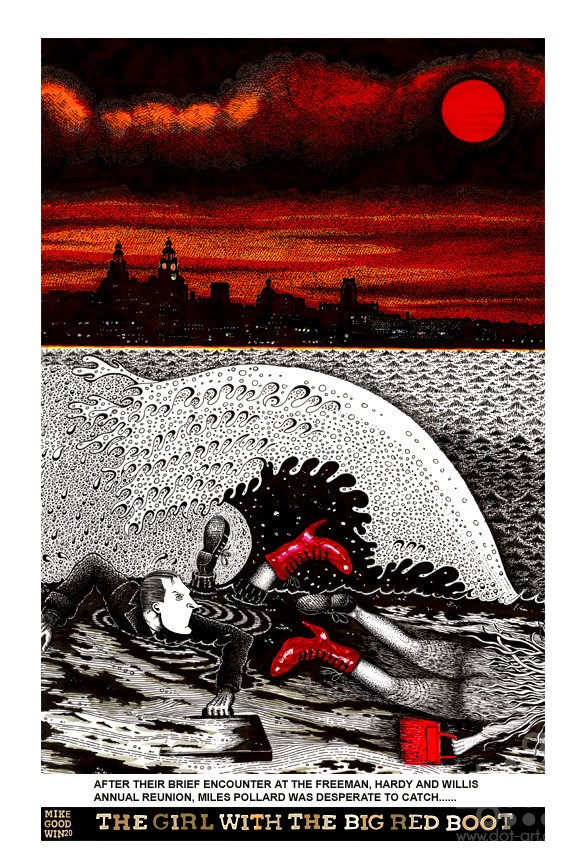